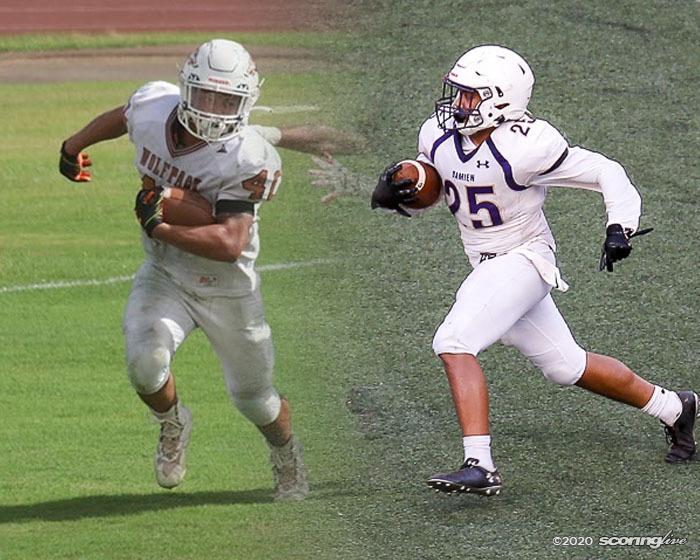 For the PAC-5 football team and its interim coach, Kena Heffernan, there is no better day than game day.

That's the approach that the Wolf Pack (0-1) are taking into this weekend's Interscholastic League of Honolulu football game against the Damien Monarchs (1-1), which was originally scheduled for 10 a.m. Saturday at Saint Louis.

Was, as in past tense, because the teams will instead face-off Friday at Aloha Stadium, in the nightcap of a televised doubleheader.

"(Tuesday), it was pretty hilarious because we were talking to the kids and telling the kids, ‘Hey, anytime, anyplace, anywhere,' and about twenty minutes later we found out the news and we asked the kids, ‘Hey, you want to play in the 7:30 p.m. game?," Heffernan chuckled.

"It was definitely fortuitous; to get these guys in the stadium to play ball, it can't be any better than that," he added.

The PAC-5—Damien game was flexed into the slot that was previously filled by an Open Division matchup between No. 5 Kamehameha and No. 1 Saint Louis. The game between the Warriors and Crusaders has been postponed, ILH football coordinator Wendell Look confirmed on Wednesday morning.

Consequently, the Wolf Pack and Monarchs will play in primetime in Halawa, rather than beneath the mid-morning sun at Kalaepohaku a day later.

Not that it would have mattered all that much to Heffernan's squad.

"We would have done the same thing," he said. "It definitely would have been a lot hotter, but we don't want to complain whether we're playing on Friday or Saturday, at least we're playing on one of those days and that's the main thing is that these guys have got safe opportunities to play football and not really bemoan the fact of where or when we play."

Heffernan has no qualms about losing a day of practice to the scheduling change.

"Nope. I can't tell the kids, ‘anytime, anyplace, anywhere' and then we get an opportunity and be like, ‘awww.' No, let's just play. These guys have yet to show what they can do and they just need more opportunities and experience to do it," said Heffernan, who also is the athletic director at Pacific Buddhist Academy.

After its season opener against Saint Louis II two weeks ago was canceled, PAC-5 visited No. 12 Iolani for its first game last Friday. The Raiders posted a 24-point first quarter en route to a 38-point first half in a 46-7 drubbing of the Wolfpack.

The lopsided loss provided much in the way of things to work on for Heffernan and company.

"We went over the film and for a lot of the players that was their first time doing that and I think a good amount of the time — probably an hour and a half — was spent on the first quarter alone, ‘here's our alignment mistakes, here's our assignment mistakes; we're not doing our job,' but the veterans who the first-year guys look up to were the first guys to say, ‘yeah, coach, I gotta do a better job,' " Heffernan said.

He shed more light on the film session and nature of practice earlier in the week.

"We went around, we laughed abound things, we cried about things and we know where we gotta get better, but the football IQ is a new thing to these guys. It was a good experience in being able to take part in something that we've all taken for granted in football and this week they came back to practice, they weren't down at all, they took it as experience and they're moving on to the next thing," Heffernan said. "They know they're not playing at the level they can play at, but they never got down or negative, which is really good to see; the more games these guys play, the better they're gonna get."

Heffernan estimates that only about five of his players have played in Aloha Stadium before — the rest are excited, to say the least. The team regularly practices at Manoa District Park.

"We're gonna get over there and the first thing that we've gotta do is get used to the turf," he explained. "It's good for the kids to get out there and be able to get a feeling for it, but for a lot of these guys we've been playing park ball a little bit and so even getting on a field like Iolani's was a treat for them last week, but these guys are hungry and once we get some of these guys coached up with fundaments, we'll get better and better."

The Monarchs, meanwhile, are coming off of a come-from-behind 25-20 win over Kamehameha II last Friday at Aloha Stadium.

"For me, the best thing about that was that we stuck together through adversity," said Damien interim coach Anthony "Bones" Tuitele, who noted a big improvement in that department following an opening-week 28-0 loss to Iolani.

"I know the first week against Iolani the boys got down real quick and we were all tired and basically everybody gave up. This week we faced the same thing, down 7-0 right off the bat, from the get-go, the offense couldn't move the ball so everybody's confidence dropped, but being able to stick together and fight together and stay in the moment we were able to pull through as a team," Tuitele said.

Tuitele's bunch are excited to be on television and playing in Aloha Stadium for the second time in as many weeks.

"Oh yes, most definitely. I think any kid would love to play the nightcap game at Aloha Stadium, so that adds a little juice to the team and more excitement," he expressed.

The two interim coaches were only able to exchange film on Monday, but Tuitele isn't fretting over the circumstances of the short week.

Based upon his own film study of the Wolfpack, Tuitele feels that his players and coaches will have their work cut out for them.

"They reminded me of us when we played our first game against Iolani. Despite the score — the score doesn't make a difference, that was their first game, they were out of shape, too — but they had guys flying around and just by watching film on them, they play with heart, they play with grit and you can see that on the film, so at the end of the day we're going to have our hands full come Friday night," Tuitele said.

Heffernan was impressed by the Monarchs, most notably their defensive prowess.

"Damien is well coached — it started with (former) coach Eddie (Klaneski) and now it continues with coach Bones — they've got some really good athletes, a good quarterback, good linebackers, that defense is spectacular, they have speed at receiver, and the defense picked-six twice and got a couple of fumble recoveries last week, so it's definitely a pleasure to go up against them and that's it," Heffernan said. "When it's all said and done, let's go play ball."

A quick start will be particularly important for PAC-5, Heffernan noted.

"We need to come our firing on all cylinders and I think for almost the whole first half against Iolani, our players definitely came out really timid and not believing themselves and second-guessing things, so we just need to get out there, be ready and go play," he said, "and if we can do that, it'll be a tough game on both sides of the ball."

Kickoff between the Wolfpack and Monarchs is scheduled for 7:30 p.m.

Every contribution, no matter the size, will help ScoringLive continue its mission to provide the best and most comprehensive coverage of high school sports in the state of Hawaii and beyond.

Kaiser takes to the air to overwhelm Waialua

Easton Yoshino connected with Justin Kanekoa for three passing scores in the Cougars' rout of the Bulldogs.

The Golden Hawks rolled up 456 yards of total offense and held the Mustangs to minus-33 net yards Saturday.

The senior RB accounted for 243 all-purpose yards and three TDs in his debut for the Rams, who posted...

Tanioka carries Castle past No. 14 Roosevelt

The junior impacted all three phases of the game to propel the Knights past the Rough Riders.

Waianae scores in all phases in beating Leilehua, 47-6

Seariders score in all phases to beat the Mules, 47-6, to give Matt Murakawa his first coaching win