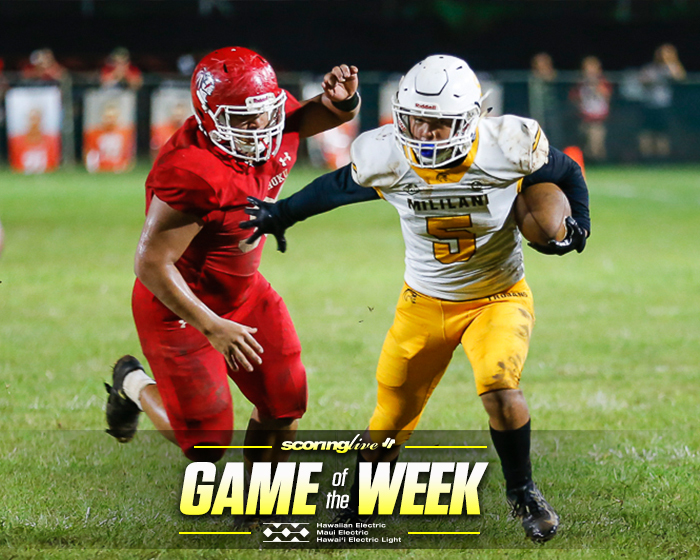 No. 3 Mililani will play No. 4 Kahuku for the league's Open Division championship Friday. CJ Caraang | SL

This game and this opponent was just the matchup that Rod York and the Mililani Trojans were hoping for.

Mililani, the No. 3 team in the ScoringLive/Hawaiian Electric Football Power Rankings, will try for its fourth league title and first since back-to-back crowns in 2013 and 2014, when it faces fourth-ranked Kahuku at Aloha Stadium Friday night.

The Trojans (8-2) and Red Raiders (7-3) will meet for the Oahu Interscholastic Association Open Division championship in the nightcap of a doubleheader. No. 5 Campbell will play Farrington in the third-place game at 5 p.m, with the winner claiming the final state tournament spot.

"Going into the offseason we trained for two teams; Kahuku is one of them and it's go time now," Mililani coach Rod York said.

It is the second year in a row the teams will meet in the OIA final. Kahuku got the go-ahead score on a 28-yard touchdown pass with less than two minutes remaining en route to a 35-31 victory over Mililani last year.

"We're right back where we wanted to be: in the OIA championship game. But we're looking to finish. We felt we let last year's game get away, so this year we know we have to play a perfect game and not give them more opportunities, take care of the ball," York said. "We can't make mistakes against Kahuku because they'll make you pay — which they did to us last year — but we're more worried about us. We're worried about our execution and just having fun and playing. I told these guys that we come out and we play to win. We don't play to lose. We play to win."

The loss meant the Trojans drew Saint Louis in the state semifinals, a game they lost, 47-23, to end their season. Meanwhile, the Red Raiders pulled out a 10-7 win over Waianae earlier that night before falling to the Crusaders in the title game, 31-28.

"Rod York said it to start the season, they ended the season 0-2, so he's gonna use that fact to motivate his players right now," said Kahuku coach Sterling Carvalho.

The teams have already played once this year. Mililani built a 17-0 lead by early in the second quarter and never looked back in a 38-10 win on Sept. 29 at Carleton E. Weimer Field.

"They want payback. They want revenge as much as we do because we lost on our homecoming this year," Carvalho said of the Trojans. "They're not gonna forget how their season ended and it was during this time last year, so they're gonna be ready, they're gonna be hungry and they were well-rested coming into last week with three weeks off, so they're healthy, excited and motivated, plus they're a team that starts fast, so we gotta make sure we match their intensity at the get-go."

Quarterback Dillon Gabriel threw for 309 yards and two touchdowns on 30-of-47 passing without an interception and running back Kilifi Malepeai scored three short rushing touchdowns in the regular-season victory over the Red Raiders.

Not that any of that matters at this point to York.

"We don't really look at that last game because we really go week-to-week and Kahuku is much better now. They're a different team than they were the last time, but so are we," York said. "We know they're going to bring their A-game because it's the championship game. A Kahuku team in the regular season is totally different than a Kahuku team in the playoffs. The reason I feel good is the kids understand that and that made them more focused going into this week."

Mililani's high-powered offense has scored 40-or-more points five times this season and twice eclipsed the 50-point mark. It averages over 38 points and 371 yards per game — including 305 passing. Gabriel has thrown for 3,002 yards and 34 TDs (against six interceptions) on the year.

Carvalho said pressuring Gabriel will be a point of emphasis for his defense Friday.

One of the many weapons Gabriel has at his disposal is Malepeai, who has rushed for a team-high 363 yards and nine TDs on the season.

"He's a quick, agile 250-pounder," York said of the senior. "It's not only his running ability, but he can make the first guy miss. He has great hands so he can catch out of the backfield and you gotta get off the block and still tackle him, so that makes it tough for the defense. He's also our sixth blocker along with the five o-linemen. His blocking ability is a huge factor for us."

Defensively, the Red Raiders have shown steady improvement and are coming off one of their best performances of the season with Saturday's 27-7 road win at Campbell.

Kahuku held the Sabers scoreless for the final three quarters and limited them to 238 yards of total offense. Peter John Mataira and Ilaisa Fotu scored on interception returns of 26 and 40 yards, respectively, in the victory.

"We're kind of hitting our stride now and I think it was a little bit evident in this past game against Campbell, in which our defense was able to force some turnovers and get two pick-6s. That was good to see. We really believe the blueprint for success, especially for our team, is our defense making plays and we're feeding off their momentum offensively and on special teams," Carvalho said.

Fotu, a sophomore, was promoted from the junior varsity after a season-ending knee injury to All-Hawaii linebacker Miki Ah You earlier in the season.

"They're missing guys and yet they still won the game with two defensive scores against a great Campbell team in a tough situation: a must-win game at Campbell and Campbell is loaded with offensively talent," York said. "At the end of the day, Kahuku's D picked two to the house and they pressure the QB and they kind of contained the offensive firepowers of Campbell."

One player the Red Raiders get back this week is senior running back Wesley Alo-Maiava, who has not played since Oct. 6 due to an injury.

"Wes has been cleared to play, so we're excited to see him get back into it," Carvalho said of Alo-Maiava, whose 450 rushing yards and 10 TDs leads the team.

The absence of Alo-Maiava the last three games has allowed for sophomore Zealand Matagi to get his share of repetitions. He racked up 56 carries for 224 yards with Alo-Maiava out and has 428 rushing yards on the season.

"With Zealand it's been about getting used to the speed of the game and the opportunities under great competition just allowed him to get better. We're very fortunate for that and he did a good job in stepping up," Carvalho said.

Since a stretch of three losses in four games, Kahuku has won its last three contests and can bring home a fourth consecutive OIA championship to the North Shore with a win Friday.

'Bows use 9-run seventh inning to pull away from Sharks

Hawaii Pacific held a brief one-run lead, but UH scored the final 12 runs of the game to overwhelm the...

Rainbow Wahine fall to No. 8 Huskies in season opener

Despite an 8-0 loss to her former team, there was no wiping the smile off of UH junior shortstop Nawai...

The 6-foot-1 freshman outside hitter, who earned All-Hawaii Third Team honors in 2018, has started all...

Rebels off to hot start, thanks in part to Capllonch, Oliveira