Football
Slade-Matautia, Ducks hoping to make most of second chance 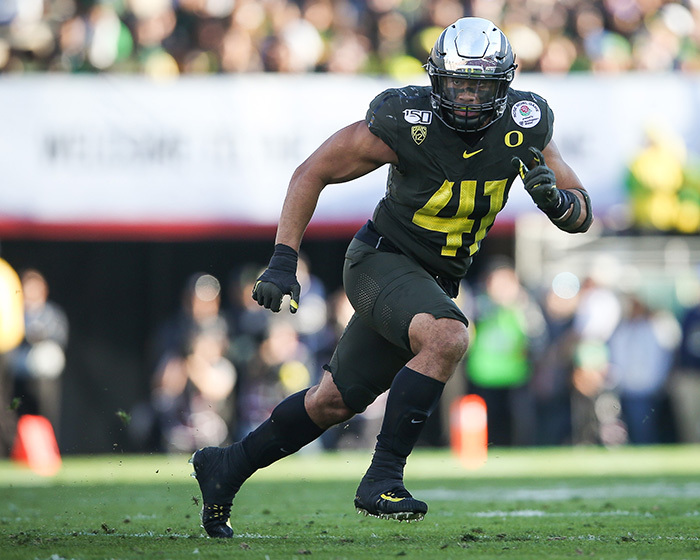 Despite a roller coaster-like past few weeks in Pac-12 North division play, the University of Oregon football team can end this tumultuous week how it started it: As conference champions.

The Ducks (3-2) will face undefeated USC in the Pac-12 Conference championship game Friday in Los Angeles. The Trojans (5-0) are the No. 13 team in the Associated Press Top 25 Poll.

Kickoff from the Coliseum is scheduled for 3 p.m. Hawaii time. The game will air on FOX.

It has been a frustrating season for Oregon, which was coming off of a 12-2 record in 2019, including a win over Utah in the Pac-12 title game and a Rose Bowl victory over Wisconsin. Coming into this year, the Ducks were picked to repeat as conference champs by the media and were slotted in the top 10 — at No. 9 — in the preseason AP poll back in late August.

"It brought us together, honestly," Oregon junior inside linebacker Isaac Slade-Matautia said during a video call with reporters this week.

"You know, it should have been two games we knew we should have had, but it showed us a lot of flaws in our game, whether it be offense, special teams or defense and as a team," said Slade-Matautia, a 2017 Saint Louis graduate who has recorded a team-high 33 tackles this season to leads the Ducks defensively.

Slade-Matautia shared what happened in the immediate aftermath of the loss to the Golden Bears.

"After the Cal loss it was special because everyone — we stood in the locker room right after the game, we shared what happened, we shared what we thought was going on — and I feel like those two losses, even though, I didn't want to say it sucked, but we knew we should have had those and I felt it was a good positive in our program; it brought the team closer," he said.

After all, there is much room for growth when you are the youngest team in the country. Of the 110 players on the Ducks' roster, 81 of them are freshmen, redshirt freshmen or sophomores.

That obviously leaves Slade-Matautia — who has played in 26 games and made 115 total tackles in his UO career — as one of the team's veteran members. For him that translates to being "the best leader I can be.

"Whether it be on the defense or cheering on the offense or special teams, you know, just be that guy people can lean on when we need a play and hope that I'll be there to make it, but from here on I'm just trying to focus on this game, trying to get this Pac-12 championship and bring it back to Oregon again," Slade-Matautia said.

That opportunity to repeat as conference champs in and of itself seemed unlikely after last weekend, when the Ducks saw their scheduled contest against rival Washington canceled and consequently were the second-place finisher in the North division behind the Huskies (3-1).

That meant that Washington would play South-winner USC in the Pac-12 title game. The conference announced the rest of the weekend's games on Sunday, which included Oregon taking on South runner-up Colorado in Los Angeles on Saturday. However, on Monday it was announced that Washington would not be able to field the minimum 53 scholarship players needed to play, which elevated Oregon into Friday's championship game.

"It was pretty hectic. I mean, for the players we had a walk-through on Monday, like in the afternoon, then we got the news from the coaches that we're gonna play in the Pac-12 championship, so then we had to come back for another practice, but you know, we just gotta take it and we adjusted really well," Slade-Matautia said. "It didn't matter who was playing, we knew that we had to play our game, but we're grateful for this opportunity."

Slade-Matautia said the team has had to get used to sudden changes with the fluidity of the situation with the coronavirus and how it has affected the college football landscape well beyond just the Pac-12. He was empathetic to the situation in Seattle.

"We really wanted to play U-Dub, because we had a chip on our shoulder against them, but after we heard what happened in their program, I was kind of bummed, but we're gonna play USC, kind of build off of last year what we did in the (Pac-12) championship and prove all our doubters wrong," he said. "We've been focusing a lot on the transition from those two teams we were supposed to play (Washington and Colorado) to USC and we're game, you know, we're grateful for this opportunity and can't wait to play."

The Ducks' defense has been middle of the pack in conference play so far, ranking ninth in the Pac-12 in run defense (184.2 yards per game), sixth in pass defense (235.6), seventh in total defense (419.8) and eighth in scoring defense (28 points per game). But Slade-Matautia said the unit has shown improvement in recent practices.

"Practice has been going well, a lot of leaders have stepped up. … like I said, with those two losses, it brought out team together," he reiterated. "We're much closer now, we hold each other accountable for things we know ain't right, or (aren't up) to our standard and culture, so we're going to take it day-by-day from here."

Slade-Matautia has seen his production increase in each of his three seasons. After a redshirt year in 2017, he saw action in seven games and totaled 20 tackles in 2018. Last season he started all 14 games at middle linebacker and was tied for  fourth on the team with 62 tackles and led the team in pass break-ups (11) and quarterback hurries (six). He was one of just 21 players in FBS to record 60 tackles and double-digit pass break-ups in a season and one of just two linebackers to achieve the feat.

But for now, he's solely focused on USC.

"They're the best team in the Pac-12 and their offense is great. … They have threats everywhere on the field, whether it be at running back or the wide receiver position," said Slade-Matautia, who notched a career-high 12 tackles against Oregon State three weeks ago.

"We're just going to have to come out and play with that chip on our shoulder," he added. "You know, we always had this saying, ‘Get on edge and stay on edge,' and we're going to have to get that mindset correct in this game and just play our heart out."

One player that Slade-Matautia hopes to see across the line of scrimmage come Friday is running back Vavae Malepeai, a 2016 Mililani alumnus. The redshirt senior is the leading rusher for the Trojans with 54 carries for 255 yards and three touchdowns this season.

"It was funny because when we got the notice that we're going to play in the Pac-12 (championship game), Vae, the running back over there, he was the first one to hit me up, saying he'll see me on Friday, but my prayers go out to him," Slade-Matautia said of Malepeai, who sprained his knee during the fourth quarter of USC's 43-38 win over UCLA Saturday.

"I hope he can play this game," expressed Slade-Matautia, one of four players from the 50th state on the Ducks' roster.

Being from Hawaii is a source of pride for Slade-Matautia.

"I take that very seriously every day. You know, it's always something about Hawaii athletes being so proud of where they come from, especially when we play with or against other players from back home," he said. "It's always something special when you're playing for your hometown."

USC will be playing in its first Pac-12 title game since 2017, when it defeated Stanford, 31-28, at Levi's Stadium in Santa Clara, California, the site of the last six conference title games. This year's Pac-12 championship game was scheduled to be played in Las Vegas at brand new Allegiant Stadium, but was moved to the site of the division winner with the better record due to COVID restrictions.

Oregon will be making its fourth appearance in the conference title game since its inception in 2011. That season it defeated UCLA, 49-31, Autzen Stadium. The Bruins were the second-place team in the South division that year, but played in the championship game in place of USC, which was ineligible due to NCAA sanctions.

USC leads the all-time series against Oregon, 38-21-2, but the Ducks have won five of the last seven meetings and three of the last four in Los Angeles, including last year's 56-24 rout.

If the Trojans cannot play, Colorado will take their place in the title game.

Kickoff Friday is scheduled for 3 p.m. Hawaii time. The game will air on FOX.

Every contribution, no matter the size, will help ScoringLive continue its mission to provide the best and most comprehensive coverage of high school sports in the state of Hawaii and beyond.

Crusaders squeeze past Buffanblu for first league title since 2017

Aiva Arquette doubled, tripled and scored both runs for Saint Louis, which held Punahou to just one hit...

Jeremiah Lono's towering solo homer to lead off the top of the sixth proved to the tying run, as both...

Top-seeded Maryknoll swept past third-seeded Hawaii Baptist in the championship match of the league's...

The Spartans pulled away in the bottom of the fifth for an emphatic win to capture the 2021 ILH title.

The Surfriders slugged 17 hits in Wednesday's rout of the Rough Riders, including seven extra-base knocks,...