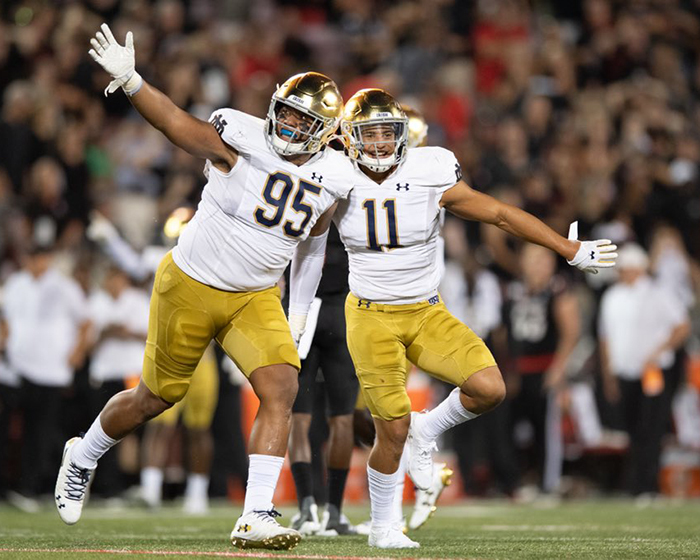 Myron Tagovailoa-Amosa has got a lot to be thankful for these days. And he doesn't need the Thanksgiving holiday to remind him of that.

The 2017 Kapolei graduate from Ewa Beach is in his second season as a full-time starter on the defensive line for one of college football's most storied programs: Notre Dame.

Tagovailoa-Amosa is a senior defensive tackle for the second-ranked Fighting Irish (8-0), who will visit No. 25 North Carolina (6-2) Friday in a nationally-televised Atlantic Coast Conference contest.

Notre Dame — the No. 2 team in both the Associated Press Top 25 Poll and the first College Football Playoff rankings of the season, which were released Tuesday — ranks among the best defensively in multiple categories. It is 11th in the FBS in total defense (304.1 yards allowed per game), 12th in scoring defense (16.6 ppg) and fifth in rushing defense (85.1 ypg).

But Tagovailoa-Amosa and the Irish will be put to the test by a Tar Heels team that averages 233.5 rushing yards per game, which ties them for the 16th-best mark in the country — with Notre Dame, of all teams.

"For us as a d-line, that's a challenge that we like to take, because this is probably going to be one of the bigger o-lines that we face, but as a d-line, we definitely love the challenge up front, so it's really going to come back to re-setting the line of scrimmage, affecting the QB and just affecting the throws that he makes," Tagovailoa-Amosa said during a video interview with media members on Monday.

The 6-foot-3, 285-pound Tagovailoa-Amosa is part of a three-man rotation for the Irish on the interior defensive line. As a three-technique d-lineman — typically aligned on the outside shoulder of the offensive guard — the position draws a large number of double-teams from opposing fronts. That's something that Tagovailoa-Amosa is quite familiar with by now.

Although he had recorded just 10 total tackles in the seven games he's appeared in this season, Tagovailoa-Amosa has done yeoman's work in the trenches that has not gone unnoticed by Notre Dame coach Brian Kelly.

"The defensive line position is one where if you're getting double-teamed on a particular play, your job is to hold that double-team as long as you can. It's not very glamorous, (but) he's done his job," Kelly said.

Tagovailoa-Amosa said that it's all just part of the job.

"That's just the sacrifice you have to make. Playing as one of 11, I've just got to do my job and trust that my brothers have my back and that they're doing their own jobs," he explained.

The role certainly takes a toll on the body of Tagovailoa-Amosa, as well as his stats. But the only stat that matters to him at the end of the day is a win for his team.

"There's no frustration to the point where I get that selfish feeling that I want to do more. Everybody wants to do more, everybody wants to make the play, but when it comes to playing the game of football, you're not going to make as many plays and that's something a three-tech, an inside guy, interior d-lineman has to understand. Sometimes we've got to stick on those double-teams and sacrifice the play just to get the scheme correct; it just comes down to doing our job," he added.

Tagovailoa-Amosa's job duties have increased in each of his four seasons. As a freshman he appeared in all 13 games and played approximately 25 percent of the defensive snaps that year. However, a foot injury in the season-opening game of his sophomore year forced him to miss all but two games that season.

In 2019, his first season as a starter, Tagovailoa-Amosa started all 12 games he appeared in and was on the field for approximately 40 percent of all defensive plays. He totaled 22 tackles, including 2 1/2 for losses, six quarterback hurries and one fumble recovery for the year.

During the preseason, Kelly commented on Tagovailoa-Amosa's continued progression leading up to the 2020 campaign.

"Going into this year now, Myron has a great sense of what they're trying to do to him and he can defeat blocking schemes, whether it's a run game or being savvy enough to understand whether it's a screen or a drop-back pass; He's got a complete game," Kelly said.

Yessssirrrrrr 🤙@myraaann with the TFL for the Notre Dame defense.

Tagovailoa-Amosa started off the season with four tackles, including three solo stops and a tackle for loss, in a win over Duke. He had another TFL in a rout of South Florida a week later, but did not play against Florida State on Sept. 19.

He was one of two defensive starters who were held out of for reasons that were never entirely disclosed by Notre Dame, but comments by Kelly seemed to suggest both were due to contact tracing, as neither player was out for injury or disciplinary reasons.

Tagovailoa-Amosa took the episode in stride.

He returned for the Irish's win over Louisville the following week and two weeks later, tallied three total tackles and one sack in a romp over Pitt. Earlier this month, Tagovailoa-Amosa and the Irish were at the center of the college football universe with their 47-40 win over then-No. 1 Clemson in double overtime.

"It was definitely exciting to get the win, but I think one of the things that for us as a team that we really try to focus on is, you know, it's just like winning any other game. We can't be too celebratory on that one victory just because it's Clemson, because you know what, we're going to see them again and it's really just going to come down to beating the greatest team and so we were definitely excited for that night, but as soon as that night is over we were moving on to the next team," said Tagovailoa-Amosa, one of three players from Hawaii on the Notre Dame roster.

Sophomore linebacker Marist Liufau, a 2019 graduate of Punahou, and freshman defensive end Jordan Botelho, who graduated from a semester early from Saint Louis last December, have also seen time on the field this season.

Liufau made his first career start in the season opener against Duke and made three tackles in the win, while Botelho scored a touchdown on special teams on a blocked punt return against South Florida. 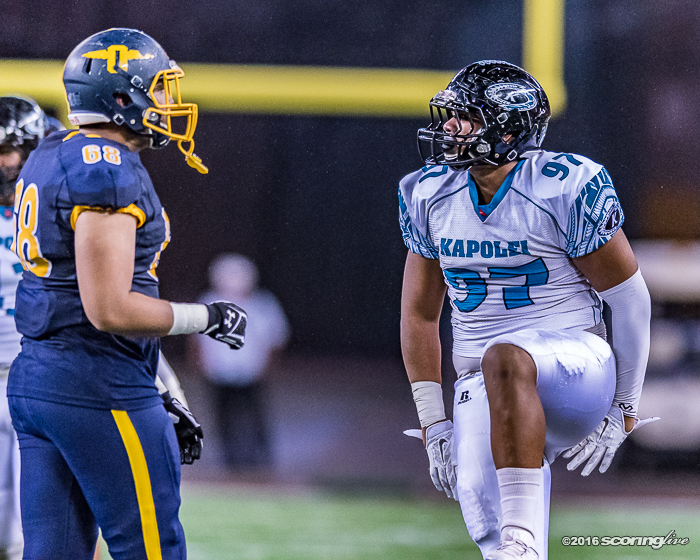 Before they became teammates in South Bend, Indiana, Tagovailoa-Amosa and Liufau faced off in the 2016 state tournament when Kapolei came away with a 33-21 win over Punahou in the opening round of the inaugural Open Division bracket.

Both players made their impact felt in the contest: Tagovailoa-Amosa registered 4 1/2 sacks for the Hurricanes, while Liufau posted a team-high eight tackles for the Buffanblu.

It's a period of his life that Tagovailoa-Amosa reflects upon with great appreciation.

"I really enjoyed my time in high school. I had great teachers, great coaches and I'm grateful that I had the opportunity to attend Kapolei," said Tagovailoa-Amosa, who, as a senior, was selected as the OIA Division I Red Conference Defensive Player of the Year, in addition to All-Hawaii First Team honors.

It was an all-encompassing experience at Kapolei that Tagovailoa-Amosa thrived in, beyond just his exploits on the football field.

"I had a great coach, I had great teachers — teachers who really prepared me for basically what's happening now. They were always hard on me in class. My teachers were actually — my teachers and my coach — really close with my mom and as any student-athlete, that is like, you don't want that, but it definitely kept me in shape with academics, as well as athletics, so I definitely enjoyed my time there," he said. "It was definitely just an amazing experience."

Kickoff between Notre Dame and North Carolina is scheduled for 10:30 a.m. Friday. The game will air live on KITV.

The 2019 All-Hawaii First Team guard has started eight of 10 games this season for the Lancers, who are...

With leading scorer Keala Quinlan held to a season-low four points, Roosevelt's depth was put to the...

The 2017 ILH Division I MVP and All-Hawaii First Team guard made stops at Salt Lake CC and Nevada, Reno...

OIA Executive Director Raymond Fujino talked to ScoringLive Wednesday about what went into the league's...

Talking The Kick Back sneaker event on Jan. 9 and notable pairs with Gabe Scotti and Keanu Deboma.

Although it returned just one starter from the previous season, Leilehua went 9-1 in the OIA West and...