Football
Kahuku alum Kaniho excels on the field, in the classroom for Broncos 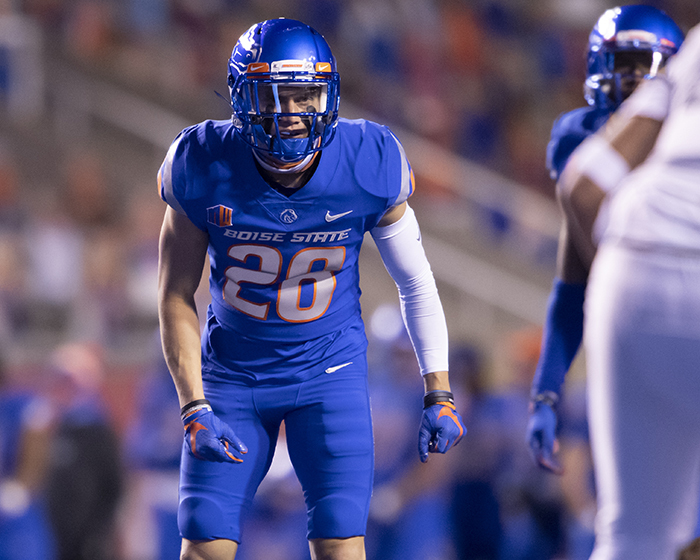 A lot has transpired in the four years since Kekaula Kaniho last played a game at Aloha Stadium.

Kaniho, a 2017 graduate of Kahuku, will make his return to Halawa this weekend, when he leads Boise State into Saturday's Mountain West Conference football game against host Hawaii.

For Kaniho, a 5-foot-10, 183-pound senior nickelback, the contest will be almost exactly four years to the day — Nov. 19, 2016 — since the final game of his prep career, when his Red Raiders fell to Tua Tagovailoa and the Saint Louis Crusaders, 30-14, in the title game of the inaugural First Hawaiian Bank/HHSAA Open Division State Championships.

That won't be the case Saturday, as this one — just like the rest of UH's four home football games this season — will take place sans spectators due to the coronavirus pandemic.

"I think it's going to be definitely weird," Kaniho said during a media availability session via Zoom Thursday.

Kaniho, a First Team All-Mountain West selection last year, isn't exactly sure what to expect Saturday, he just knows that it won't be what he's used to.

"I'm used to having a full stadium and the ‘tomahawk chop' going and things like that, so being back now especially and probably not being able to see my family even just with everything going on and the strict protocols, it's definitely going to be weird, but you know, I'm glad to be home," said Kaniho, who has played in 45 games in his Boise State career.

Broncos coach Bryan Harsin told local media during his weekly press conference on Monday that there will be no playing tourist during this trip.

"We're going to be respectful of what they are asking us to do, just basically show up, play the game and leave," Harsin said, alluding to the state of Hawaii's strict COVID-19 measures in place for all arriving passengers.

That doesn't leave Kaniho — one of five Broncos from the 808 — with much time for catching up with family and friends; this is purely a business trip.

"Of course it's a bummer because that's something that I've been looking forward to for a long time, but the way this year has been going we're just kind of used to just the situation we're in and we knew that this was probably going to be the case coming into the season, so I'm grateful that we still get to come to Hawaii and that nothing happened where this game got postponed or canceled or anything like some of the games early in the season have for other teams, so for that I'm thankful and excited to just get out there (Saturday)," Kaniho said.

Boise State is coming off of a 52-21 win over Colorado State last Thursday, in which Kaniho scored on a 91-yard blocked field goal return for one of his team's three special teams' touchdowns — six days after it was thumped at home by No. 9 BYU, 51-17.

Although it was a non-conference game as the Cougars are an independent, Kaniho said the lopsided defeat served as a humbling experienced for the Broncos.

"That game is something that as a defense and as a team we had to own and take accountability for because that's a performance we put on film, so just coming back in the day after that game, correcting the things that we messed up on and owning those things because they were all stuff that we had to take accountability for — it's all stuff that really we had complete control over, so fixing those things — and we were actually really excited that we had a short week and played Colorado State on Thursday because we were able to get back to game night quicker and kind of get over that loss to BYU and respond the way we wanted to, so it was good to have the type of game that we had last game," he explained.

But for Kaniho, he brings the same methodical, workmanlike approach every week, regardless of wins and losses. It's a work ethic that he says that, in part, was instilled in him during his prep days at Kahuku, where he was a member of the football, basketball and track and field teams.

"I think the biggest lesson is just learning how to work, just finding that work ethic because when you're in high school nobody knows you yet, nobody knows your name, some people might not even come to check out your school, so learning how to work and grind even when nobody's watching because when the opportunities come and arise, you want to be ready for those opportunities, so just constantly getting after it every single day, even if you don't think anybody's watching, you don't think anybody's gonna notice, just continue to work," he said.

Kaniho's achievements go beyond the athletic variety, however. He is also a standout in the classroom, where he owns a cumulative grade-point average of 3.94. He is a three-time Academic All-Mountain West selection and was voted to the Division I Academic All-America Football Second Team by the College Sports Information Directors of America last year.

Just last week Kaniho was named to the National Football Foundation's National Scholar-Athlete Class and was announced as one of a dozen finalists for the William V. Campbell Trophy, which is presented annually to college football's top scholar-athlete. More recently he was named one of 30 candidates for the Senior CLASS Award, which is an acronym for "Celebrating Loyalty and Achievement for Staying in School."

"I think I'm equally as proud of both of those accomplishments, whether it's on the field or off the field," said Kaniho, who credited his parents, Misty and Jarrett, for imparting in him the importance of a good education. "From an early age my parents always stressed that ‘school always comes first and that's something that you have to take care of because if you don't, you're not gonna be on the field.' "

Kaniho recalled a time — "I think I was second or third grade" — that he didn't put his best effort into a school project.

"I was procrastinating and my mom kind of got on me. I remember this and she was like, ‘If you don't get a good grade on this assignment that you turn in, this project, I'm not going to let you play baseball this year,' and right there was when it kinda just all set in that like, ‘Hey, this is equally, if not more important than just playing sports,' so I'm thankful to be recognized for the awards and the recognitions on the field and also equally as blessed and thankful for the recognition off the field," said Kaniho, who will receive a postgraduate scholarship of at least $18,000 as a Campbell Trophy finalist.

Should he be selected as the recipient of the award, Kaniho would earn a $25,000 scholarship.

"I'm excited to use the money that I got from this most recent award for post-graduate education and finishing up my undergraduate next semester, so that's all something that I'm looking forward to," he explained.

Kaniho is on track to graduate next semester with a degree in health science.

"I'm majoring in health science — general health studies is the emphasis and then I also have a minor in business — so from there I think I'm gonna pursue an MBA, a masters in business administration after, so we'll see," he laid out.

With the NCAA granting a blanket waiver back in August that allows all fall sports student-athletes to retain their eligibility for the 2021-22 season regardless if they choose to participate this fall or not. For Kaniho the proclamation leaves open the possibility for him to return for a fifth year with the Broncos. But he hasn't crossed that bridge just yet.

"It's definitely something that I've thought about, but right now there's really no, I really have no idea of what's going to happen, you know, after these four weeks with what my plan is so I'm just enjoying every day, taking it day-by-day and I'm just grateful that I'm here right now and almost finished with school is something that I'm looking forward to so I'll graduate next semester and that's really my main focus right now, is focusing on today, enjoying it right now and making sure I get school finished with next semester," Kaniho said.

While at Kahuku Kaniho was a two-time All-Hawaii First Team pick, including the 2016 Open Division Defensive Player of the Year. He was inducted into the HHSAA's Hall of Honor as a member of the class of 2017. 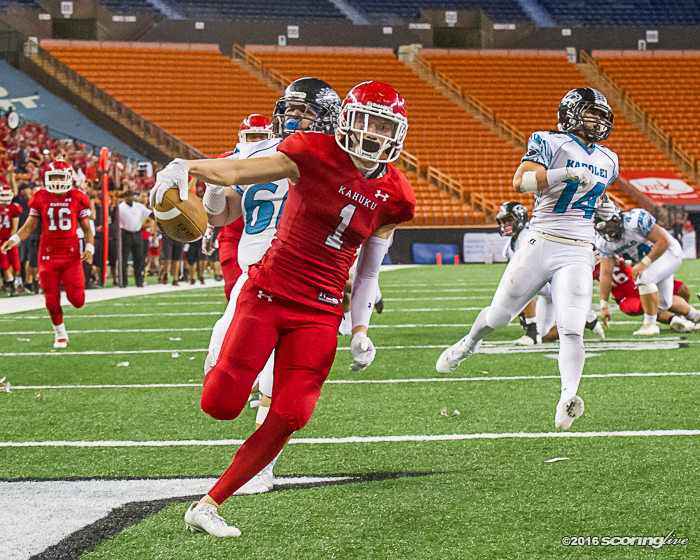 "Leaving high school four years ago, I was just really excited to kind of start that next chapter of my life and be away from home and grow from that standpoint, so that's been great learning just from all of those things, top to bottom," said Kaniho, whose younger brother, Kaonohi, a 2019 Kahuku alum, is a freshman cornerback for the Broncos this season.

"it's great now having my brother here to help him through that process of being a freshman and moving away from home and things like that, but the opportunities that I've gained here — not only as a player, but as a person, too — meeting people out in the community, going to events that get set-up by some of our school staff and things like that has been awesome and I just fell in love with this place and what it has to offer and really enjoy playing in front of this community; It's kind of similar to the community that we have back home at Kahuku," he pointed out.

Still, nothing beats home for Kaniho, who is expected to make the 31st start of his Broncos' career Saturday night.

"This was the game that everybody had circled for a long time. They knew that my senior year I was gonna be coming back home and now with me and my brother on the same team, everybody was hoping they could come and watch that in-person, but I think it's just gonna be a lot of garages and living rooms that just have the TV on, watching us," said Kaniho, who has recorded a team-high four pass break-ups this season in addition to 18 tackles, which ties him for fifth most.

Saturday's game will be nationally televised on CBS Sports Network.

Boise State has won its last eight meetings against Hawaii.

The 2019 All-Hawaii First Team guard has started eight of 10 games this season for the Lancers, who are...

With leading scorer Keala Quinlan held to a season-low four points, Roosevelt's depth was put to the...

The 2017 ILH Division I MVP and All-Hawaii First Team guard made stops at Salt Lake CC and Nevada, Reno...

OIA Executive Director Raymond Fujino talked to ScoringLive Wednesday about what went into the league's...

Talking The Kick Back sneaker event on Jan. 9 and notable pairs with Gabe Scotti and Keanu Deboma.

Although it returned just one starter from the previous season, Leilehua went 9-1 in the OIA West and...