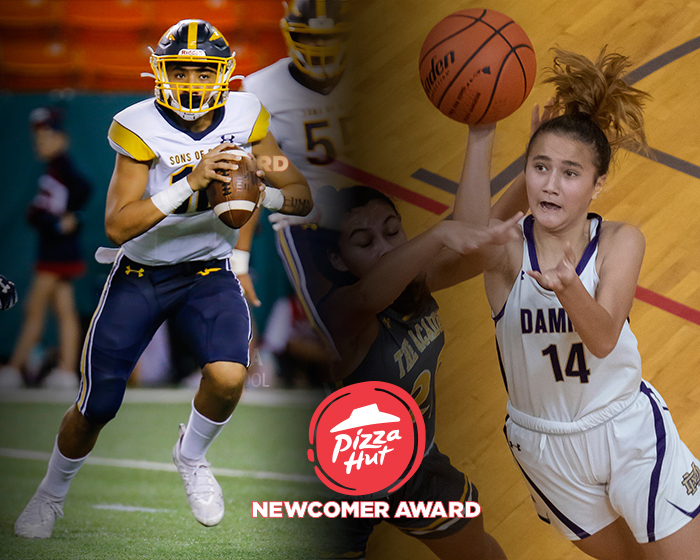 Punahou's John-Keawe Sagapolutele and Damien's Theresa Anakalea were named the winners of the 2019-20 Pizza Hut Newcomer Award, which honors a male and a female student-athlete participating in their first full year of play in varsity athletics.

Sagapolutele was thrust into action following an injury to senior Hugh Brady in the second game of the season, and the freshman delivered from that point on for the Buffanblu, completing 60 percent of his passes for 2,135 yards with 16 touchdowns and seven interceptions. Sagapolutele completed 27 of 43 passes for a touchdown and no interceptions in Punahou's upset bid of Saint Louis on Sept. 20. He is the first Buffanblu player to win the honor.

Anakalea, a freshman guard, led all Division II scorers with 22.5 points per game and hit 25 three pointers, good for second amongst all D2 players. She scored 24 or more points in nine games, which included a 41 point outburst against University Lab on Dec. 14 and a 30 point outing against OIA Division I power Kahuku during the preseason. She is the second Monarchs' basketball player to win the Newcomer Award in as many years (Jake Holtz).

It is the seventh consecutive year that ScoringLive has recognized a male and female Newcomer Award winner.

Kalawaia Judd's three total TDs and an inspired defense lifted the Cougars to its first win over the...

Waialua went on to finish 7-3 in 2016 and captured its first OIA football title in more than six decades.

The edict, which came down on July 20 and was extended on Aug. 17, expired Sunday.

Isaac Hurd accounted for four total touchdowns in the Sabers' comeback win over the Seariders.

Nanakuli's 21-14 win over Kaimuki was its first of five come-from-behind victories that season.