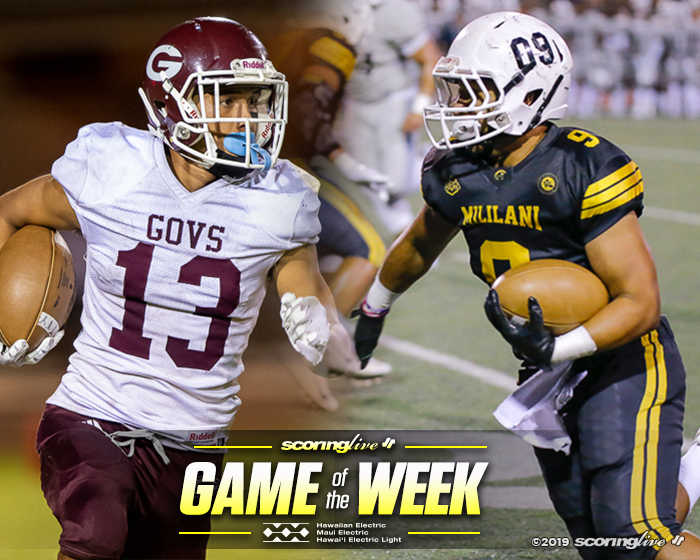 No. 13 Farrington will look to end a 10-game losing streak against third-ranked Mililani. ScoringLive photo illustration

The 13th-ranked Farrington football team knows that it will have to play its best football to extend its season beyond the weekend.

The Governors will travel to John Kauinana Stadium Friday night and face No. 3 Mililani in a semifinal game of the Oahu Interscholastic Association Open Division tournament.

Mililani has won its last 10 games against Farrington, including a 35-0 victory when the teams met early in the regular season on Aug. 24 and a 47-7 rout on Oct. 27 of last year in an OIA semifinal at Kauinana Stadium.

"We're going to have to play a nearly-flawless game and not turnover the ball," Govs second-year coach Daniel Sanchez said. "Hopefully we can get them in a field-position game and try to control the clock on them and score on our possessions."

The defeat at the hands of the Trojans this season was part of an 0-4 start that included three losses by shutout. Since then, however, the Govs have opted to ditch the spread passing attack it started the year with in favor of a more traditional run-first offense that the program has long been synonymous with.

"We've made some changes and I think it's worked out for us. Hopefully the changes can make a difference against Mililani this time," Sanchez said.

Sanchez's team picked up wins over Kapolei and Waianae to assure itself of a spot in the four-team league playoffs, but the former Farrington fullback points to a 28-25 loss to Kamehameha that was sandwiched in between its two victories as the game that provided the most for the players going forward.

"We were ahead I think with a minute-something left and we didn't finish the game. We had some penalties that helped them continue the (game-winning) drive and I think that right there kind of helped us to realize that we've got to play for four quarters and we gotta get the job done; You can't just rely on three quarters and expect to win the game," Sanchez said.

Leading the way for the Govs offensively has been junior running back Raymond Millare, whose 536 rushing yards ranks sixth in the Open Division. The 5-foot-9, 175-pound Millare is averaging 5.0 yards per carry and has scored a team-high four touchdowns on the year.

Sanchez, however, is cautious not to be overly reliant on Millare or the run game Friday night.

"The Mililani defense is stout and I think probably right behind Saint Louis and Punahou. They have some great athletes and so I think it's going to take a mixture of running it and throwing it and mixing it up on them," Sanchez said. "I think when you look at their previous games, guys who try to just line up and run it right at them weren't successful, so you've got to mix it up and be successful that way."

Mililani coach Rod York knows that his team will face an upset-minded Farrington squad that is much improved since the regular season meeting back in late August.

"They've got momentum, they're also peaking at the right time heading into the postseason like everyone else is, but like anything we're more worried about ourselves and the execution and everybody doing their job," York said, "But we know Farrington will be ready for us, so we're ready."

The Trojans, meanwhile, have lost three of their last four games entering the postseason — most recently a 3-0 loss to No. 2 Punahou last Friday at Aloha Stadium.

Mililani posted 213 yards of total offense to Punahou's 137, but was hamstrung by four turnovers (two interceptions, two fumbles lost) and was shut out for the first time in nearly two decades. Its nine penalties for 98 yards certainly did not help.

"It's a big concern, but it starts with me," York said . "I'm the (offensive coordinator) and I've got to coach better. We call this a new season, the postseason; We want to peak in the postseason and that's exactly what we're going to do. We met a lot more, did a lot more film, had each player grade themselves and at the same time, look at the play-calling and what we're doing in practice and tweak some things here and there. I feel like we got a lot better, players and coaches, but just more paying attention to the execution of the game plan."

The Trojans enjoyed an average margin of victory of 27.8 points during their 6-0 start to the year and while they completed an undefeated regular season in OIA play (5-0), York is sure that the three losses to national powerhouses St. John Bosco (Bellflower, California) and Saint Louis, along with Friday's defeat at the hands of Punahou, have provided the most growth for his team.

"From that game against Punahou we were able to gain experience and face adversity against a great team. People say the game doesn't count (in the OIA standings), but it's a championship experience," York said. "That Saint Louis game, great crowd, the stadium was exactly how a state championship would feel and we got the same feel against Punahou and that's huge for us. We lost the game, but at the same time it's not the end of the season. We've got new life and we'll build on that. We're hoping we improved and got better, but we'll find out Friday."

Among the standouts for Mililani offensively has been senior wide receiver Kanoa Gibson, who ranks third in receiving yards (837) and second in TD receptions (10) in the Open Division. He had six catches for 98 yards and three TDs against Farrington earlier this season.

"I think our kids know that Mililani can be a very explosive team and they're one of the top teams in the state. I think their speed is a concern. I mean, I think they have tremendous speed on the defensive side of the ball, too, and they're obviously well-coached. Rod has his system down and those kids run the system in and out, so looking at it, our kids know they gotta eliminate their mistakes and play to their capabilities," Sanchez said. "And if we can do that, they we should be in for a ball game."

A week after its win over Farrington last postseason, Mililani went on to capture its fourth OIA championship — all of them coming in York's 10-year tenure — before eventually finishing as state runner-up to Saint Louis for the second consecutive year.

The other Open Division semifinal this weekend features No. 5 Campbell (5-4) taking on No. 4 Kahuku (6-3) at Carleton E. Weimer Field Saturday night.

The semifinal winners advance to next Saturday's OIA championship triple-header at Aloha Stadium; the losers will play next Friday for the league's third and final state tournament berth.

Twelve student-athletes recognized based on the criteria for athletic excellence, academic achievement...

Fifteen graduating student-athletes were awarded a $5,000 scholarship from HMSA.

View video messages from your 2019-20 All-Hawaii Players of the Year and Newcomer Award winners.

Annual award honors a male and a female student-athlete participating in their first full year of play...

Lahainaluna running back, Kamehameha outside hitter recognized as top prep athletes in 2019-20 school...