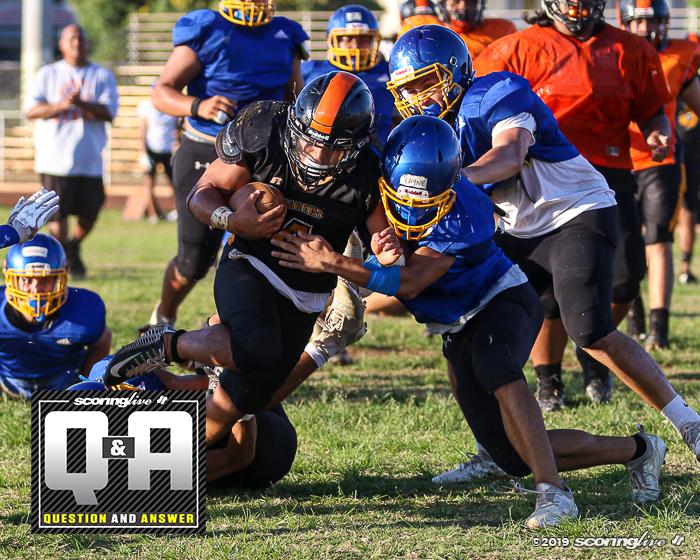 HIlo's defense has held opponents to an average of just 6.2 points and 89.2 yards each time out in 2019, and the team also leads the Pizza Hut Defense/Special Teams Scoreboard with 97.5 points, more than 36 points ahead of second place. Michael Lasquero | SL

The sixth-ranked Hilo football team has won all of its games in convincing fashion so far this season, but this weekend it will face arguably its toughest test all year.

The Vikings (5-0 overall) will travel to Kealakekua Friday night for the first of two regular-season meetings against Konawaena (4-1). The teams are tied atop the Big Island Interscholastic Federation Division I standings with matching 4-0 league records.

At stake is first place in the Big Island Interscholastic Federation Division I standings at the midpoint of the 10-game schedule. Also on the line will be Hilo's 17-game win streak in BIIF games, which dates back to Oct. 15, 2017.

The last team to beat the Vikings in a league game?

Konawaena rallied from an early touchdown-deficit to come away with a 24-14 win over Hilo in that game played at Julian Yates Field. It was the only loss for the Vikings that year, who went on to finish 10-1 and capture the D1 state championship.

Much as the circumstances were that time around, the teams are the top contenders for the BIIF crown — only this time the Wildcats are vying for the same title that the Vikings are after having moved up from the D2 ranks over the summer.

Hilo's offensive numbers have been astronomical, with fourth-year varsity player Kyan Miyasato at the controls at quarterback. The Vikings are averaging 66.2 points and 382.2 yards per game. They have scored no fewer than 51 points in a game, while the defense has held opponents to an average of just 6.2 points and 89.2 yards each time out.

The Vikings have outscored their last two opponents 170-0 and last surrendered a touchdown in the fourth quarter of a 51-21 win at Kealakehe on Aug. 30.

While Hilo has been led by its experience at the skill positions, Konawaena has had to largely rely on youth in numerous areas of the field. However, outside of a 38-14 loss to Southern California-power Mission Viejo, it hasn't seemed to affect the Wildcats all that much.

Konawaena is averaging a healthy 36.4 points and 398.8 yards per game offensively, while its defense is limiting opponents to a mere 10.4 points.

We caught up with the two head coaches a few days before their highly-anticipated meeting Friday.

ScoringLive: This is the fifth season as head coach for both of you. What are you most proud of during your tenure?

Kaeo Drummondo, Hilo coach: "I've been proud of the consistency year in and year out, none of which would be possible without the buy-in from the student-athletes. I've been proud of how these players have responded to our demands and standards and how they've taken pride in the way that they work and prepare. Everyone sees the wins and loses, but no one sees the hard work and dedication that these student-athletes put in throughout the entire offseason."

Brad Uemoto, Konawaena coach: "I'm most proud of all the opportunities that our football program has given our players over the years. Many have gone on to play in college at various levels and are most importantly continuing their education. We have also had many players take other paths and become solid people in our community. The relationships that we have built together cannot be replaced and I often realize how lucky I am to have had a part in these players' lives."

What three words best describes this team that you have and why?

Drummondo: "At this point I'd say we're best described as a ‘work in progress.' We're still working on continuity with personnel, especially defensively. We've had players going in and out of the lineup on a weekly basis and we've tinkered with some position movements so just getting the same lineup in the same positions for two to three weeks in a row will be a nice thing to have."

Uemoto: "Underdogs. We relish the role of being the underdogs this week. We have the sixth-ranked team in the state coming into our house. It is tough to play at Julian Yates Field on a Friday night, but we will take any advantage heading into this game. Reveal. Within our locker room, we really feel that we have a great group of players that have the potential to be a very good team. We are currently 4-1 with some lopsided wins, a solid win against Kealakehe and our only loss to a team that was ranked in the top 35 nationally (Mission Viejo). I think our players are excited to reveal the potential of this group. Unicorn. The unicorn is a mythical creature that possesses magical, mysterious qualities. The unicorn is rare and offers power to achieves miracles and wisdom."

Which game this season, regardless of result, has proven to be most beneficial for your team?

Drummondo: "I think every game has been valuable in the sense that it has given us more and more live game reps, which can't be replicated in practice and are the biggest opportunities for growth as a team."

Uemoto: "It would definitely be the Mission Viejo game. The Diablos are currently in the top 10 of almost every state ranking in California. We played against a quality team and I feel we were very successful in many different areas during that contest. Nothing can take away the experience of playing that caliber of opponent and my hope is that we can translate that experience to compete with a great team like Hilo.

Who has been a pleasant surprise amongst your players so far?

Drummondo: "Two of our defensive backs, Stan Mwarey and Keola Balga, have both played well for us so far. They are the type of players who quietly work hard every day and do things the right way. I've been really happy with both of their development, not just this year, but over the last two seasons."

Uemoto: "At this point, it would be our younger players that have made a huge impact during the first half of the season. Hezekiah Anahu-Ambrosio, Kaden Baptista and Braydon Bailey have been solid players for us and have contributed tremendously. Hezekiah is a freshman and has been consistent on both sides of the ball. He's our starting running back and linebacker, while also taking reps at our down safety position. He has caught passes, made some incredible runs and been a steady force on defense. Hezekiah's ability to transition between different positions is tough, let alone for a freshman. Kaden is also a two-way starter at wide receiver and free safety. He currently leads our team in interceptions and is one of our leaders in receiving statistics. He's our center fielder on defense, patrolling the middle. His football IQ, speed and athleticism for a young player is rare. Brayden has been the biggest surprise for us entering the season with no returning experience at offensive line. Braydon has anchored our line at left tackle and has quietly been one of our most consistent lineman."

What are your thoughts on this week's opponent and what will be the key matchup within the game?

Uemoto: "When Hilo is on the schedule, it has always brought a little more intensity to our week. Kaeo will always bring a finished product and that forces you to prepare. The obvious concerns for us are no secret: (their) talented, quicky, speedy receivers, the secondary is loaded with athletes and experience, their line play on both sides of the ball are always solid and I think this year more than ever, other parts of their team have taken the attention off of this group. Their quarterback Kyan Miyasato has been playing varsity football for his fourth year now and nothing beats experience at this position. They have a couple nice running backs that really complement their style of offense. I could keep going on about the challenges they present, but I will probably lose more sleep from the little amount that I already get. At the end of the day, we are preparing for a really good football team. I believe the key matchup will be our defensive backs versus their receivers. Hilo has done a ton of damage to teams through the air that cannot be ignored. Our defensive philosophy is to stop the run, but we will definitely need to focus on how to slow down their pass game as well. Open-field tackling, fighting off perimeter blocking, giving them different looks and executing our game plan will make or break our success defensively."

Drummondo: "We don't worry about the scoreboard. We worry about several important factors that we try to accomplish on a weekly basis, irregardless of our opponent. The important things for us are: our approach (our mindset to preparing for the week's opponent, our brotherhood (making sure we're playing for each other and not ourselves or other outside reasons), our communication (making sure we are talking and helping each other out), our discipline (minimizing mental mistakes and unforced errors) and our execution (doing our individual jobs with great effort and technique and within our schemes). We feel like if we do those things we put ourselves in a great position to be successful every week."

Uemoto: "We can limit Hilo's big plays offensively and execute our offensive system. This is our first meeting of the year. We will remain very vanilla with a few wrinkles ready. It's the first round of a prize fight and playing a game against Hilo with something on the line is new to us. I was a fan of Lennox Lewis, he loved playing chess and he took that methodical mindset into the ring with him. He boxed with strategy and was never concerned with what wins looked like. He would grind away and execute his game plan to perfection. We will take that mindset into Friday night's contest while knowing that we will need to play near perfect football."

Kickoff between the Vikings and Wildcats is scheduled for approximately 7:30 p.m. Friday at Yates Field. The second-round meeting will take place on Oct. 25 at Wong Stadium, the final weekend of the BIIF regular season.

Through the lens: Brandon Ching

SL reporter Brandon Ching looks back at some of his favorite images shot in the 2019-2020 season.

Well over 200 messages of aloha have been sent in honoring the Class of 2020. Click to view shoutouts...

Contingent upon state and county directives and safety guidelines, a date of Aug. 17 has been set as...

A look back at the HHSAA Division I championship matchup between the Warriors and the Buffanblu that...