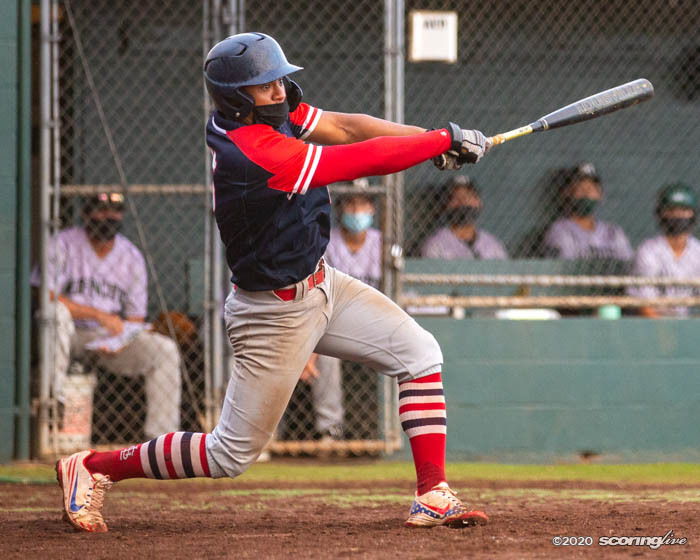 Saint Louis' Caleb Lomavita pitched a complete game and also hit two home runs to back his own cause in an 11-6 win over Mid-Pacific. Brien Ing | SL

Saint Louis got a complete game performance on the mound by Caleb Lomavita and backed it with four home runs offensively in an 11-6 win over Mid-Pacific.

"It wasn't really the home runs, it was putting the ball on the bat, making sure you hit it at the right place at the right time," said Lomavita. "Home runs are good but the main part that I kind of told my team was to keep the energy up because Saint Louis runs on energy."

And there certainly was no shortage of energy in the Crusaders' bats against the Owls, particularly in the top half of the order.

Of the 11 runs and 16 hits put up by Saint Louis, hitters one through five in the lineup accounted for all but two of the runs scored and five of the hits rapped out. Lomavita led the way with two home runs, a three run shot in the first and solo blast in the fifth.  Nuu Contrades was 3-for-4 at the plate with three doubles and two runs scored, while Aiva Arquette laced a solo homer of his own in the fourth inning and scored twice.

Despite the offensive display, there was little assurance of victory on the minds of Lomavita and company. The Owls trailed 7-2 after two complete, but got back into the game on bases loaded double by Carter Wong that plated two runs to trim the lead to 7-4. Later in the fifth down 9-4, Mid-Pacific trimmed the margin down to three again with a two run single by Travis Ito.

"They are a team that scores runs," said Lomavita of the Owls. "Coach Dunn does a great job of prepping hitters and turning good batters into great batters."

"I wasn't expecting them putting up seven on the board but they did a heck of a job at the plate and made my job ten times harder."

Making Lomavita's job just a bit easier was the last home run of the afternoon, which came off the bat of Ryson Waalani. The shot lofted to center field pushed the run total into the double digits for the Crusaders.

"Cody (Antone) told me first pitch changeup so I was like ok, I seen the changeup coming I let my hands go and hey it happens," said Waalani of the at bat. "It was good, it was a good feeling."

Lomavita got the job done on the mound, but as mentioned earlier, it wasn't a walk in the park by any stretch. He threw 112 pitches in the contest, allowing three earned runs on seven hits. He struck out four and walked two.

The win over the Owls sets up a Saturday showdown with Punahou, who beat Kamehameha 6-4, for the ILH Division I title.