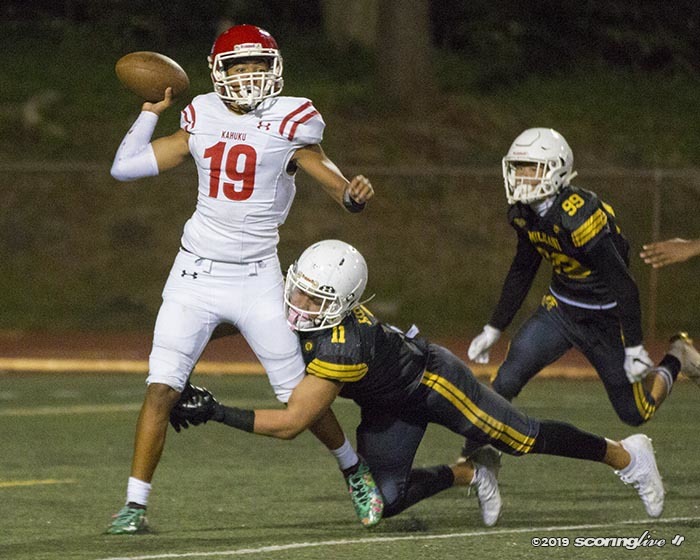 Mililani's Wynden Hoohuli (11) made six tackles, three of them for losses, including two sacks, and forced one of three fumbles. Greg Yamamoto | SL

MILILANI — Unlike most two-way threats in football, Mililani linebacker Wynden Hoohuli does not play offense. He made contributions on defense and special teams to help No. 2 Mililani score in its 32-0 win against No. 5 Kahuku Saturday night at John Kauinana Stadium.

The much-anticipated match of the Oahu Interscholastic Association Open powers — a rematch of last year's OIA Open championship won by Mililani, 27-7 — had just about everything, except a dominant offensive threat. The Trojans (2-0) held the Red Raiders (1-1) to 83 yards of offense in part to special teams play and a big-play defense.

"The guy is a dual threat," Mililani coach Rod York said of Hoohuli. "He did a good job with the field position."

At linebacker, he led the Trojans with six tackles, three of them for losses, including two sacks, and forced one of three fumbles. His first sack came early when he dropped Alex Fonoimoana-Vaomu in the end zone for a safety to give Mililani a 2-0 lead with eight minutes, 29 seconds left in the first.

As a punter, his 38-yard precision punt pinned the Red Raiders to their 2. Kahuku eventually punted from its 5 and Mililani took over from the Red Raiders' 35 to set up Kaulana Navares' 30-yard field goal. In the fourth quarter, he had a modest 26-yard punt that went out of bounds at the Kahuku 8. The Red Raiders again punted to only their 19. The Trojans cashed in on the good field position with Navares' 35-yard field goal.

"I've punted my whole life," Hoohuli said. "I've always been the punter, even at Saint Louis when I played JV (there) ... I just look at the punt return team and punt it where they're not going to be and just get 'em pinned down back there and make sure my team is in the right spot."

The Trojans defense stifled the Red Raiders' offense all game. Mililani had 10 different players dropping Kahuku ball carriers for 70 yards of lost yardage. The shutout was the first handed to Kahuku since Sept. 9, 2017 against Bingham (Utah) in Las Vegas. The Red Raiders have not been shut out by a Hawaii team since Aug. 15, 2008 in a non-league game against Kamehameha at Aloha Stadium.

"We just needed to get into a rhythm," Kahuku coach Sterling Carvalho said. "Mililani was just a better team tonight."

Although the score showed dominance by the Trojans, the stats do not show it. Mililani had 135 yards of offense and eight first downs, albeit the first downs were few because of the good field position it got.

Trojans' running back Malosi Sam, who was a workhorse a week ago with 42 rushes for 257 yards, carried eight times for 18 yards. After Sam scored on a 14-yard pass from Brendyn Agbayani early in the third to make it 26-0, he was pulled from the game. York said it was to protect his prized back from the wear and tear for the long haul in the Open season.

"We pulled him out when we were up 25," York said. "We had to get the next guy going. (Jasiah) Alcover didn't play the first game; he wasn't available, so we wanted him to get early reps. We had to keep (Sam) safe."

Special teams made their presence felt in all phases. Navares booted field goals of 30, 35 and 38 yards. Hoohuli had five punts with a 42.2-yard average, including three that were downed inside the 20. After the safety, Kanoa Gibson returned the ensuing free kick 41 yards to the Kahuku 30 that set up Agbayani's 31-yard TD pass to Mystic Sampaga.