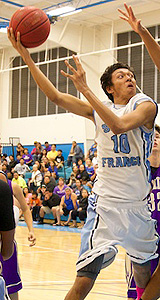 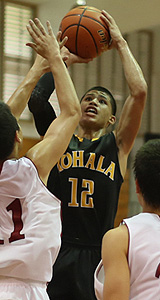 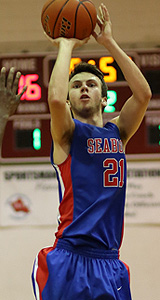 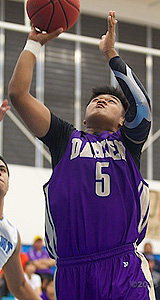 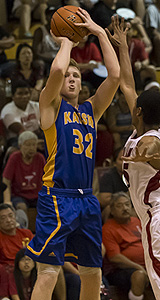 The ScoringLive All-Hawaii Division II Boys Basketball First Team features players from four different leagues around the state. Just one league had more than one representative on the first team – the Interscholastic League of Honolulu – including, Player of the Year Matt Nuumanaia. Joining Nuumanaia on the first team are Seabury Hall's Cameron King, Kohala's Kealan Figueora, Kaiser's Chance Kalaugher and Damien's Jaylen Layco.

Nuumanaia, a 6-foot-5 senior swingman, was the leading scorer in the ILH this season with 16.7 points per game in league play. The reigning ILH Division II player of the year was also equally if not more impressive in the preseason, exploding for a season-best 32 points against Mid-Pacific in the 2013 Saint Francis School/Merv Lopes Hoops Classic. He even was able to score 23 points on Iolani, the eventual Division I state champions. Despite dropping their first two games of the season, the Nuumanaia and the Saints were able to rattle nine straight wins to claim their third straight league title and state berth.

King, a 6-foot-2 senior guard, was electrifying in the Division II Maui Interscholastic League, averaging 22.2 points per game. His 37-point outburst against Molokai was one of the biggest scoring performances during the season statewide. With King, the Spartans were able to make the state tournament for the sixth straight year. King's 19.3 points per game during the state tournament also earned him a spot on the Division II All-Tournament Team.

Joining King in the backcourt is Figueora, a 5-foot-8 junior guard. Figueroa's excellence in the regular season earned him Player of the Year honors in the Big Island Interscholastic Federation Division II. Behind Figueroa's scoring ability, the Cowboys were able to go 9-3 in league play, even picking up a win over BIIF Division I champion Konawaena in a 58-57 overtime thriller. Kohala was also able to claim a Division II BIIF title, clinching a state berth and avoided a play-in game for the final berth in the tournament.

Kalaugher, a 6-foot-5 sophomore forward, is one of the promising young talents across the state, having participated in the Iolani Classic slam dunk contest. Although he was a little raw to start the season, Kalaugher blossomed into an integral part of the Cougars' Oahu Interscholastic Association White Division title run. Kalaugher averaged 13.1 points per game during the season, earning him an honorable mention nod in the OIA Eastern Division All-Stars.

Rounding out the All-Hawaii Division II First Team is Damien's Layco, a 6-foot-2 senior forward. Layco was one of the most consistent players in the state this year, scoring in double figures in every game since the start of the regular season. He also had a penchant for rebounding, averaging 8.2 boards per contest in games where rebounds were recorded.

Taking home the inaugural All-Hawaii Division II Coach of the Year award is Kaiser first-year coach Branden Kawazoe. In his first year at the helm, Kawazoe led the Cougars to the OIA White Division crown, their first overall in school history.